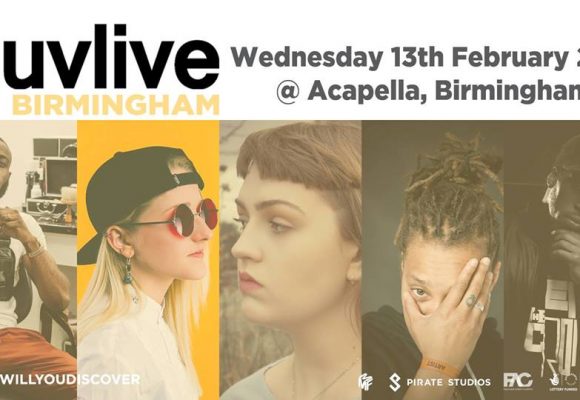 iluvlive is coming to Birmingham – and we’re hosting it!

Five well established, up and coming artists will be performing this event, each bringing their own unique sound to the evening. ?

GAMBIMI
Gambimi is a British-Congolese artist with a fresh and modern take on the much-loved classic RnB genre. Inspired by both his distinguished African origins and a wealth of Anglo-American musical influence, Gambimi’s much championed and unique vocal range has seen him described as ‘the master of serenade’.

Since kicking off his career in 2015, Gambimi’s music has featured on BBC Radio 1Xtra by DJs such as Charlie Sloth, MistaJam and Ace, after being supported heavily by BBC Introducing West Midlands. Between 2017 -2018, Gambimi has been on tour with Lottoboyzz’ “AFROBBEAN ROADTRIP” and Punch Records’ “Welcome to my tour”. Currently, Gambimi is working on his debut EP due to come out in 2019.

ESTHER TURNER
Birmingham born and bred artist Esther Turner was exposed to music from a young age with influences of Joni Mitchell, Craig David, Avril Lavigne Micheal Jackson, which later encouraged her to seek her own musical preferences. She has supported a number of high profile acts including Ed Sheeran, Katy Perry and The Jacksons.

Esther is as much at home on the big stage as busking on the high street but can usually be found playing local live music venues. Keen to further develop her sound, a recent evolution of her acoustic style has seen her experimenting with a growing number of electronic effects units to produce a complex and engaging live performance.

Esther is working hard on her original records (plus accompanying music videos on YouTube).

LEKKY
The self-acclaimed melody warrior, whose music fuses R&B, Indie and Hip Hop, telling stories through a British melodic rap songwriter style. Formerly known as Elektric, Lekky explains her music as therapy, leaving her crowd singing her songs. Likened to UK legends such as Estelle and Ms Dynamite her music is made for the storytellers and the soul searchers.

Born in Leamington Spa and raised in Birmingham. Lekky was destined for performance and has been creating music for the past 12 years. Her debut EP ‘Not Another Love Song’ supported by Baby People was toured across the UK and Europe at respected venues such as 02 Academy, 02 Institute, Rough Trade, The Jam Café, and Nottingham Playhouse. The east midlands ‘Say It Loud’ tour with “Floetry’s’ The Floacist drew attention from the local and national press, highlighting Elektric as a rising star. Elektric has also been supported frequently by BBC WM, BBC Radio 1 and BBC 1XTRA, and local radio stations.

NAOMI DAWES
Naomi Dawes is a singer, songwriter, producer and performer from Birmingham. She started writing songs at the age of 13 and began performing when she was 16. She has been in and out of bands over the past few years, but finally decided to go solo at the beginning of 2017.

She has just released her debut single ‘Evergreen’ Which was recently featured on BBC introducing WM. Her powerful and haunting voice will leave you longing for more. Naomi is defiantly an artist to keep an eye on!

S MAVERICK
S Maverick is a Solo Artist and Producer, who mixes and masters all of his music. His music is influenced by a variety of genres like Trap, Grime, Soul and RnB and Hip Hop.

His music also carries a powerful message that challenges gang culture. S Maverick is dedicated to encouraging positive expression, he delivers music workshops in prisons across the UK and has worked with gangs and vulnerable adults.

S Maverick is currently working on new music and will soon have a Spotify artist page.